See how the money transfer through message application works and WhatsApp Pay impact on Brazilian payments. 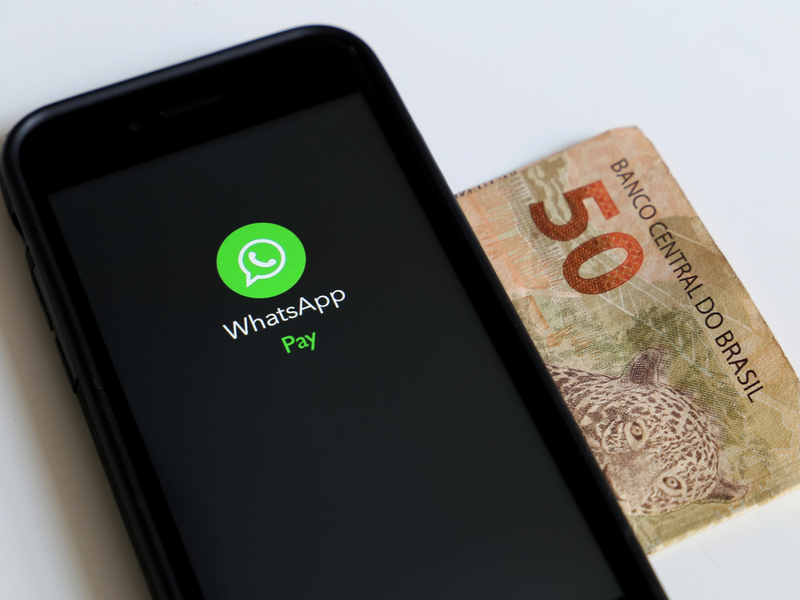 Since May 2021, Brazilians using WhatsApp to send messages can also use this application to send money to their contacts. We are talking about approximately 120 million people who will gradually have access to this new function. For the time being, the service received authorization from the Central Bank of Brazil only to operate among individuals. But there are indications that in a next stage, payment via WhatsApp will also be a reality in transactions by companies.

Payment through WhatsApp: why Brazil?

Brazil is the second country in the world to experience this novelty, further to being the second largest public for the application in Latin America. The debut happened in India, which has the highest number of users in the world (around 400 million). There, access to payments on WhatsApp started in November 2020.

Further to the impressive number of people using WhatsApp in Brazil, the behavior of users also draws attention. According to Mobile Time and Opinion Box survey, 99% of Brazilians’ smartphones have the messenger installed. Each day, 93% of the respondents use the application. Another 5% say they use it nearly every day.

The first step to join the potential reach of the app with companies happened in 2018, when WhatsApp opened its interface API (Application Programming Interface), allowing brands to use it as a communication channel with its clients. It worked: major players, such as Nestlé, Banco do Brasil and Unilever resorted to such strategy.

Payment via WhatsApp: a demand of the Brazilian market.

As a result of the brand interface with the application, the Brazilian consumer became used to the close relationship and expedition offered by the tool. Still according to Mobile Time and Opinion Box, after 6 months of operation of the WhatsApp Business, 76% of the users were already communicating with the brands through the app. At the same time, 54% would buy goods through the chat and 61% wanted to use the WhatsApp Payment. The data is from January 2020.

The forecasts were accurate. In August 2020, some months after the commencement of social isolation caused by the pandemic, a survey by Accenture consulting company pointed out that 83% of the Brazilian consumers were already using the tool for purchases. However, payment still represents a hindrance. Without a solution integrated into the platform, alternatives on how to send a payment link through WhatsApp, for example, had to be thought over.

The user’s experience in sending a payment through WhatsApp is also as simple as sending a picture or video to a contact. Just a click on the paperclip icon or on “+” and select the option “payment” in the list is needed.  Subsequently, the application will request information on the amount to be charged or transferred.

The use of the service requires registration in Facebook Pay. The first step is to agree with the terms of service. Then, it is time to create a PIN, a type of electronic signature that validates the transactions. Depending on the phone, the PIN may be biometrics or facial recognition. Subsequently, the user must inform the full name, Individual Taxpayer’s Register number – CPF and debit card information.

That is when security protocols come in. When entering data on the card, the application responds by sending a code via SMS, e-mail or bank application. Then, the PIN will be requested at each transaction made. For now, payments can only be made between Brazilian accounts and in reais. Transfers are free and can be made 7 days a week, 24 hours a day.

WhatsApp Pay is a payment initiator

WhatsApp Pay was approved by the Central Bank of Brazil as a payment initiator. In this mode, it is only allowed to perform transaction orders. In other words: it does not have access to the money. Its role is to communicate with the bank, so that the user’s request is fulfilled. For the time being, Visa and Master brands, Cielo (as acquirer) and, so far, nine financial institutions in Brazil, are participating in the operations. They are: Banco do Brasil, Itaú, Bradesco, Banco Inter, Mercado Pago, Nubank, Next, Sicredi, and Woop Sicredi.

WhatsApp Pay and the future of digital payments

As with Pix, WhatsApp payment arrives with the proposal of promoting financial inclusion. Being familiar with the application is a positive point for more people to consider adopting digital payment methods. The service is expected to reach greater popularity when companies are authorized to join the flow. Another expected news is the addition of credit cards to payment methods. This proposal is still under analysis by the Central Bank of Brazil.

Everything indicates that WhatsApp will become a superapp, just like WeChat in China. By concentrating communication and sales on a single platform, many possibilities to increase customer service open up. Facebook’s interest in entering this universe may lie in the end-to-end mapping of the public’s behavior, since it does not profit from the transactions.

Despite the encryption used in the app and the security protocols created for the payment function, there is still some insecurity among users about scams and fraud. On the other hand, there are already successful cases of the new functionality in Brazil. São Paulo State Government has adopted WhatsApp Pay as a payment means for public transportation tickets. The goal is to replace the magnetic card with the digital ticket via QR Code. Mercado Pago, in turn, has already transacted more than BRL1 million in payments on WhatsApp.

Local payments for your company: Count on Bexs Banco’s solutions

Brazilian consumers are the target of attention from all over the world. Facebook’s efforts with the Central Bank of Brazil to implement this new function to WhatsApp is just another example of how powerful this market is. To access it, one of the main requirements is to offer payment methods compatible with Brazilian reality. In short, it is necessary to stay tuned to what is new and to the consumption habits of this population.

Bexs Banco has the perfect Pay in Solution for your business! Sell to customers in Brazil with local currency and payment methods and receive payment anywhere in the world. Contact one of our specialists and find out how.

Understand the differences between payment gateway and PSP

Despite being used interchangeably, there are fundamental distinctions in what they are and how they work.