Home >  international • Payments   The disruptive in global education during the pandemic

Home » Blog » The disruptive in global education during the pandemic 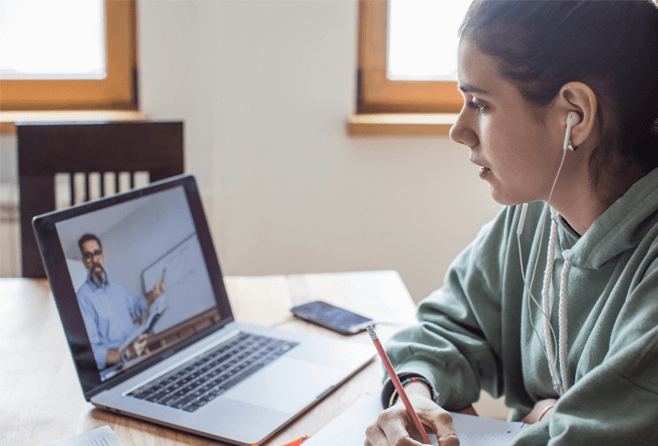 The need for physical distancing to contain the coronavirus pandemic has spurred an unprecedented transformation in various industries. On a global scale, education is undergoing its greatest structural transformation since the early 20th century. According to UNESCO, on March 23, 2020, there were 1.38 billion students without physical access to schools in 186 different countries.

In response, e-learning ceased to be a supporting tool to became a core vehicle in education, driving the definitive shift to rapid innovation in habits in both teaching and learning in the industry. The world is on the brink of the most dramatic digitalization movement in the history of education. In China alone, 250 million students have shifted to virtual platforms. A recent survey conducted by Google identified a 130% increase in searches for non-degree graduate programs offered via distance learning during these times of physical distancing. E-learning has taken on a lead role.

It is important to note that global investment in edtechs (startups focusing on education) was already on a clear upward trend before the pandemic. The World Economic Forum projected a surge from US$18.66 billion in 2019 to US$350 billion in 2025. However, these numbers should be recalculated following the recent forced transition to digital platforms. So the figure could be reached earlier. Many learning apps, workplace software and videoconference platforms have expanded free access and are attracting massive numbers of new users. In Brazil, Catho Educação reported a 70% increase in enrollments in e-learning programs from March 21 to April 6 this year, while interest in remote programs increased by 45%.

Byju’s consolidated its position as the world’s most valuable edtech following a funding round in which it raised US$540 million. This Indian app recently reported a 200% increase in the number of users. In China, DingTalk announced its expansion to 100,000 new cloud servers. A partnership with the Zhejiang University made available 5,000 virtual programs in 2 weeks at DingTalk ZJU. Meanwhile, the public media network BBC launched Bitesize Daily, its education platform for kids in the United Kingdom. More examples like these are replicating across the world.

However, a problem is clearly emerging from this rapid transformation in global education: the challenging adaption of teachers and content to the digital environment, as well as the quality of Internet access and of the technological devices suitable for education. These structural issues become barriers to the universalization of e-learning. These are significant obstacles with the capacity to further aggravate inequalities in opportunities between children, youth and adults. These problems exist in most countries, but some have moved to the forefront by adopting more sophisticated tools. China, Singapore and Estonia are examples of countries that are references in rapidly adapting to e-learning, given their prior experiences in the use of digital educationally technologies on a large scale.

However, the barriers to consolidating e-learning are not just structural. Some international institutions offering non-degree programs with distance-learning formats already are more advanced in learning tools and platforms. However, in general, they face other kinds of barriers, such as bureaucracy in payments for enrollment and classes, which poses an obstacle to foreign students. These students from other countries have access to few payment methods, and are vulnerable to fluctuations in foreign exchange rates and to the duties levied. In addition to a slower process in general, the final converted amounts can increase and, due to impossibility of paying in monthly installments, many students end up dropping out of the program.

Once these challenges are overcome, e-learning should become the leading education tool. Compared to studying on-campus, digital learning results in at least 25% more content retention in 40% less time, according to the World Economic Forum. This efficiency gain is due to the possibility of each person studying at their own pace, which affords greater flexibility to students. Age is another influential factor in e-learning. There is consensus among experts that children require shared learning environments, while young adults are more used to digital tools.

Is the future of e-learning supporting fully online or hybrid educational systems? What space is left for the on-site education that we know? We do not have clear answers. The fact is that this is not a momentary adaptation but rather a long trend. It is important that companies improve the teaching aspects of their platforms while overcoming the technological and payment barriers. In this way, they will ensure that everyone can access cutting-edge digital education. Technology can be a major ally for increasing access and equality in the offering of basic and advanced education.

Contact our experts to learn about how to optimize and streamline the payment process of education tools for Brazilians. Click here.